I kinda need a new phone

So originally I was just going to do a follow up toot but this turned out to be longer than I first anticipated. So I recently ran a poll asking about people’s favorite custom Android ROM. 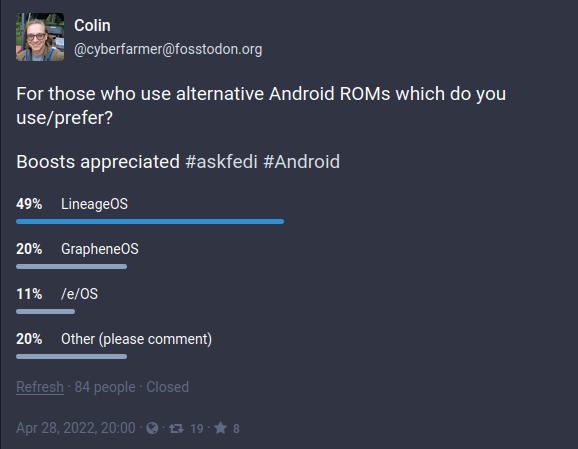 This wasn’t just because I was bored of course, I’m in the market for a new phone. Well kinda at least. My current S10e works fine but it’s seen better days. It’s time on a farm has killed it’s AUX port and the USB-C port can be finnicky at times. But my main gripe is vendor lock in.

It’s a Verizon phone, which means no custom ROMs, no switching carriers, no anything. And well Verizon is bleeding my wallet like a stuck pig. I’m on their cheapest plan and still pay $60 a month. Plus now that I’m no longer in rural Vermont I don’t need their slightly better rural coverage.

Now it’ll probably be another few weeks before I fully decide what I want to do but I do have a current leaning. Originally I was leaning towards GrapheneOS, the idea of a security first ROM was intriguing to me.

But then people commented for the other option and one name just kept popping up. CalyxOS. Now somehow I must’ve missed the memo because CalyxOS looks pretty much perfect for me. MicroG so no Google, focus on security, friendly community, long time phone support. Now the Irony of having to buy a Google phone just to ditch Google is not lost on me, but you know what they say, “No ethical consumption under capitalism.”

So yeah, thank you to everyone who voted in this and boosted it for visibility. I’m sure I give a follow up toot when I finally decide on what to do.